(this post contains material that parents may find unsuitable for younger children, vegetarians, or almost vegetarians)

All of Here Bugu is buzzing with anticipation about the cow that is going to be slaughtered today in light of the end of the Ramadan. 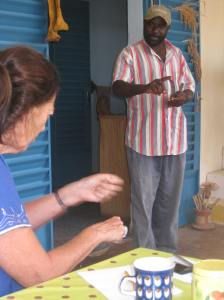 The nine trainees/employees walk about with a hop in their step. Gael and Yvonne look like they’re waiting for a root canal treatment. Baba is running around trying to figure out how to get the cow to Here Bugu. Sedou, the house guardian from the Dogon, is looking for the perfect knife.

Later in the morning, Baba arrives with a tied up cow in the back up of the pick-up truck.

The guys drag it out and put it on the ground, in embryonic position. The cow is quiet and terrified, the fear in its eyes fired up by the glow of excitement in the eyes of the guys. For about 10 minutes, the guys stand around the cow, casually looking down at it and discussing strategy. They sharpen the knife in front of the cow’s nose, which is frantically gasping for its final precious air.

Movement in the group. One guy digs a hole next to the cow’s throat. The cow’s eyes widen. Six guys now hold the cow and one leans in with a knife. He scans the throat with his knife for three seconds and then, without hesitation, he cuts the cow’s throat, quick and smooth.

Blood gushes out, straight into the hole. The six guys lean on the cow with their full weight, while the cow struggles and scrambles, with half its throat wide open. The guy with the knife cuts several targeted arteries and nerves, and more blood flows out. 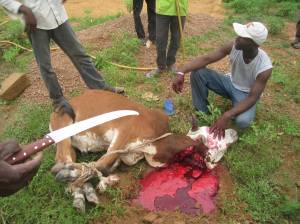 The cow screams out and the noise goes straight through the heart like a sharp arrow. As the main guy stands with one foot on the cow’s nose, the half muffled noise makes it sound even worse. On top of the cries, there’s the morbid sound of blood getting stuck in the air pipe. Like the final drops being sucked through a straw. Pure agony, raw and cruel; and it goes on like this for ten minutes.

In accordance with Muslim prescriptions for the preparation of halal food, the cow may not be killed instantly; instead, the blood needs to flow out freely while the animal stays alive. And alive it stays. After 15-20 minutes, when all the skin is taken off, when all its legs are cut off from the knees on down, I can still see the heart beating.

Throughout the western world, numerous discussions have been devoted to the extent of suffering that an animal has to go through when it’s slaughtered in a halal (muslim) or kosher (jewish) manner. Of course, no one can ever feel what it is truly like for the cow. However, it seems to me from the screams, the kicks, and the look in the cow’s eyes that it was definitely suffering, unnecessarily and way way way too long.

Knowing I won’t get any useful answer, I can’t help but ask one of the guys why they don’t just kill it off completely. He looks at me with a smile and he just shakes his head. I see him thinking “these are our traditions, you’ll never understand.” He’s right, I don’t. 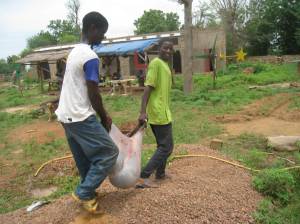 The guy with the knife turns out to have been a butcher for 20 years, and it shows. With great precision and skill, he skins the cow, takes out all its organs, and cuts up all the meat. It’s fascinating to see him at work and to see each of the cow’s organs being taken out one by one, the liver, the stomachs (literally full of shit), the intestines, etc. 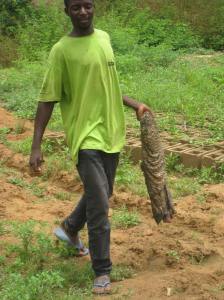 But then, when I see the muscles around the heart still contracting after 20 minutes, all I can do is hope that the cow is not feeling anything anymore.

As the whole ritual was about Yvonne and Baba giving the cow to their nine trainees/employees, everything gets divided equally. In the end, there are 11 little islands (also two for Yvonne and Baba), all with exactly the same amount of meat, all with 11 similar parts of each organ. Where there was a cow two hours ago, there are now 11 black plastic bags on the floor, neatly laid out for each to take home.

I go back into the house and sit down for a bit to regroup from the intensity that I just witnessed. Baba says that my bus doesn’t leave today. I had totally forgotten that I was supposed to leave for Burkina Faso today. However, the Ramadan will only officially end when the imam can see the moon. This could be tonight, but it could also be tomorrow. If it’s tonight, it means tomorrow will be party time and the first bus will leave the day after tomorrow. If it’s tomorrow, the first bus will leave in three days. I’m stranded for another couple of days at Here Bugu.

Yvonne, Gael and I go to Mopti to buy groceries at the market and run some errands. When we get home, we eat a truly delicious meal with a tasty fresh piece of steak (medium-rare), prepared by Gael. With varying degrees of success, I’m trying hard not to think where my steak was eight hours ago.

This entry was posted in Mali. Bookmark the permalink.